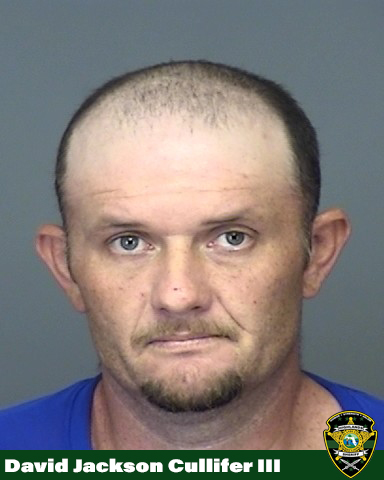 A 93-year-old woman reported that someone had stolen a large amount of cash out of an envelope in her bedroom on Aug. 17. When it happened again on Oct. 2, there was good reason to suspect that it would happen again. The third time, however, would not be a charm for the thief.
Det. Du’Wayne Kelly installed a game camera inside the victim’s home on Oct. 8. He also put an envelope containing a marked $20 bill in the same spot the other envelopes had been stored. Just before lunch yesterday, Kelly got an alert that the camera had picked up motion. He could see photos of a man -- who was wearing gloves and a mosquito-net style facemask -- taking the bait.

Deputies responded and when they arrived, they saw 33-year-old  walking out of his home, which is next door to the victim, wearing the same clothes as the guy in the photo -- minus the gloves and mask.
The gloves and mask were soon recovered, and after initially trying to give an excuse as to why he had been in his neighbor’s house, he eventually confessed to all three thefts. The marked $20 bill was found in his wallet, too.
He was charged with three counts of burglary, two counts of grand theft from a person over 65, one count of petit theft and one count of possession of burglary tools.
Note: Not all arrests result in convictions. Everyone is considered innocent until proven guilty in court.